9th July, Hong Kong: Bader Al Sada and Nasser Al Mansouri led from start to finish to give Qatar its first gold medal at the 20th Asian School Tenpin Bowling Championship with a convincing victory in the Boy's Doubles.

Al Sada scorched the lanes at SCAA Bowling Centre with a stunning 279 in his opening game as his partner, Al Mansouri added a 256 to give the first Qatari pair a total of 535. Singles gold and bronze medallists, Hideaki Hata and Naoto of Japan rolled 517 totake up second, 18 pins adrift.

The Qatari pair continued their relentless pace reeling in 497 and 486 in their next two games to extend their lead to 131 pins at the helfway mark. Hong Kong B Team's second pair of Wilson Chan and Derick Yau moved into second spot, 16 pins ahead of Hong Kong A Team's first pair of Alex Yu and Keith Mark.

Japan slipped down to fourth after managing only 425 and 408 in games 2 and 3. Al Mansouri rolled the championship's first 300 in the fourth game and with Al Sada adding 222, Qatar stretched their lead even further to 186 pins.

The two Hong Kong pairs continued to trail the leader in second and third while Japan remained in fourth. Qatar ended with 447 and 428 to take the convincing victory with 2915. Yu and Mark ended with 448 and 450 to seal second spot with 2729.

Japan bounced back with 500 in the fifth and 430 in their final game to clinch third spot with 2709 while Chan and Yau fizzled off with 437 and 398 to miss out on the podium with 2689. Singapore A Team's second pair of Isaac Lai and Dylan Teoh completed the top five with 2618.

After two events, Singles gold medalist, Hata led the All-Events standings with 2800 from 12 games contested. Al Mansouri moved into second spot with 2755 while Kanno was placed third with 2724. The girls will contest their Doubles event after lane dressing later today.

Competition will shift to the Team of Four tomorrow over two blocks on three games each. The top 16 boys and top 16 girls based on their All-Events standings (18 games) will qualify for the Masters finals on July 11 and 12.

24 May, Doha: Qatari, Ali Al-Ali bagged the title of Ramadan Tournament 2019 Champion on May 24, 2019 at Qatar Bowling Center. Ali who also lead the qualifying round defeated Sultan Al-Qatan in a 2-game series 373 - 335 in favor to Ali. Sultan landed in second place winning 15,000 QR. On the other hand, Yousef Al-Emadi ended as 3rd placer after leading a game for position 3 to 12 winning 7,000 QR. The Champion of this tournament take home 25,000 QR cash and trophy.

Challenger and winner of Step 4 finals, Wu took a 31-pin lead over Lalisang, 204-173 in the first match. In the second match, both started off with two consecutive strikes, a spare in the second frame and another strike each in the fourth frame.

Wu failed to spare his fifth frame giving the Indonesian a slight lead but the Hong Kong national recovered with five consecutive strikes to put the tie beyond his opponent. Although Lalisang responded by striking home from frame eighth to win the second match, 236-234, Wu clinched the title with a two-game total of 438-409.

"I didn't have a good start during the first block of the qualifying rounds but managed to find a good line to bowl in the second block to qualify in the top bracket," said Wu after his victory. Results...

"I had a modest start in the Step 2 finals but when I had a few big games, I knew I had a chance to make the knockout finals. In the match against Keith Saw in Step 4, I was confident I could beat him when I saw he was struggling to repeat the form he showed in Step 3 finals.

"Again in the championship match against Lalisang, I knew it would be a tough match as the Indonesian is a very good bowler but when he too struggled in the first match, I knew I could win. It's defiitely a good start to the year and I'm looking forward to do well for the rest of the year."

The champion, who pocketed the top prize of US$20,000, had earlier brushed aside, Saw, 438-360 in Step 4 finals to face topseed, Lalisang. Saw defeated fourth-seed and compatriot, Muhd Jaris Goh, fifth-seed, Michael Mak of Hong Kong and Ghanim Aboujassoum of Qatar, 467-428-382-410 to advance to Step 4 finals.

Lalisang picked up US$12,000 as first runner-up while Saw took home US$6,500 as second runner-up. Jaris Goh, Mak and Aboujassoum earned US$3,500 each for finishing fourth to sixth positions.

Fifty-four bowlers from 14 countries took part in the PBA-WBT H.H. Emir Cup 2019 qualifying through four squads of 12 games. 24 qualifiers contested Step 1 finals with the top 12 advancing to Step 2 finals joined by the top 8 seeded qualifiers from the general standings. The field was cut to six to advance to the knockout stage from 20 finalists in Step 2 finals.  Source: http://abf-online.org/results/emircup19_Step5.htm | Photos by: Terence Yaw     Results...

All event winners, for boys division Finn, Jesse Ahokas bagged the first place with a combined series of 4176 against next to him from Peru Yum Ishikawa ended in second place with 3947 while another Finn landed in 3rd place Otso Kahila with 3947. For girls division, Finns dominated this event after Peppi Konsteri won 1st place with a combined scores of 3847 while her compatriot Pittu Vianen ended up in 3rd with 3572 while Jenny Mathiesen of Norway landed in second with 3684. View the scores

Meanwhile, in the Team Event, Swedish team won the gold medals after shooting 5012 total series against the next team Finland with only 2 pins difference 5010 ended in Silver place while Bronze goes to Peru team with 4944 series. In the girls division, team of Finland bagged the Gold medals with 5009 series against Norway team's 4397 ended in Silver while Bronze goes to Mexico team ended with 4173 series. View the scores

Doubles event, duos from Finland, Onni Riikonen and Otso Kahila snatched the 1st place rolled with 2745 series. Landed in 2nd place Norway, EirikBjørnstadSkoglund and VetleVålbekken 2646 and Peru, Yum Ishikawa and Dai Yuzuriha with 2592 series in 3rd place. In girls division, Mila Nevalainen and PeppiKonsteri of Finland won the first place with a series of 2402 against their compatriot duos ReettaNeuvonen and PiituViianen landed in 2nd with a series of 2306 and duos from Norway, Nora and Jenny bagged the 3rd place with 2252 series. View the scores

The Qatar Bowling Team bagged the Overall Winner for boys division at the World Youth Championship 2018 held in Detroit, USA. The team won 2 Golds in 2 different events - the All Event and Team Event. Congratulations for your victory!

Doha, 04-June-18: Mohamed Elessaily, bagged the title Ramadan Tournament 2018 Division A winner. He rolled consistently an average of 200 maintaining his top position in the table. He marked 266-246 in 2 consecutive games and had managed to maintain his shot ended with a series of 512 in a match play final against 2nd placer Jassim Al-Muraikhi with a series of 432. Firas Nammour landed in 3rd place while Mohamad Jamal in 4th. See score

Meanwhile,  Muhamad Rifdhi bagged the title Ramadan Tournament 2018 in the final match Division B. Rifdhi positioned 3rd during the qualifying round has surpassed the final table after his 2835 series during the top 16 finals. In the final match play, Rifdhi defeated Mohamed Elessaily in a huge gap 511-467 series. Rifdhi shoot a sizzling 300 perfect game in the 2nd game that made him surpassed Essaily and bagged the title. See score

In an all-Singaporean affair Basil Dill Ng defeated his compatriot Muhd Jaris Goh, 387-374, over two games total pins to claim the title in the H.H. Emir Cup 2018 Monday, March 5, at the Qatar Bowling Center in Doha.

The H.H. Emir Cup 2018, which drew 66 players from 12 countries, was the opening event of the 2018 Asian Bowling Federation (ABF) Tour season. The ranking event was held from February Feb. 27 through March 5 at the Qatar Bowling Center, a 32-laner in Doha, Qatar.

Qualifying (eight games, including the two highest four-game series; unlimited re-entries) ran over six days featuring 10 squads. Total 32 players advanced to the finals on Monday, March 5, including the top 8 local and overseas bowlers plus another 16 players from the mixed pool.

Those 32 were split into four groups of eight players, who bowled seven games of round robin match play. The winner of each match received 3 points while loser got zero points. Each tie was broken in a one-ball roll-off. The top 4 of each group advanced to single-elimination finals in bracket system.

In bracket play, matches consisted of two games with the highest pinfall advancing. The field was trimmed to eight, four and then two players, who determined the champion.  Source: http://www.bowlingdigital.com/

Doha, 8-12 Oct-2017: A good start for Jassim Al-Muraikhi (photo middle) after the single event of Qatar Men's Team Tournament 2017 on Sunday, October 8, 2017 at Qatar Bowling Center. Jassim Al-Muraikhi earned 1380  against 2nd placer Fahad Al-Emadi which has 1345. On the other hand, Ali Abdulrahman ended in 3rd place with 1258 series. View Score

On the second day, doubles - Fahad Al-Emadi and Yousef Al-Jaber dominated the table after they rolled 2536. Both gents showed up good performance from the start though they had slight difficulty in 3rd game but they managed to surpassed it. Jassim Al-Muraikhi and Ghanim Aboujassoum ended in 2nd Place with 2517 while Ali Al-Buainin and Mohammed Al-Merekhi in 3rd place with 2510 total series. View Score

Click here to see the results for All Events. 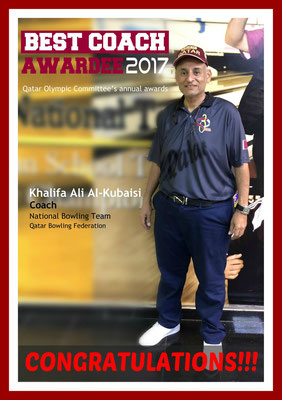 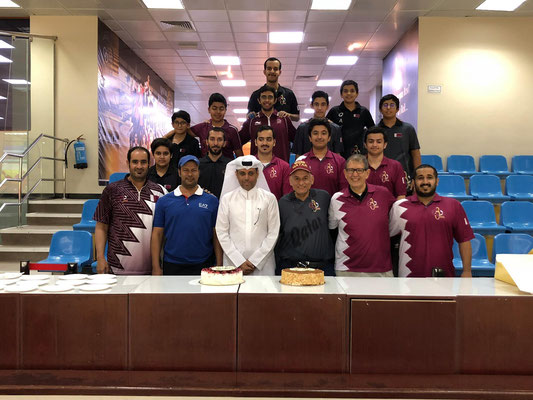